The event is the major annual fund-raising event for the HBF, and is instrumental in providing financial resources to help the Foundation advance its mission to grow the game of hockey, especially among young athletes who would not otherwise have access to coaching, equipment and ice time.

The Herb Brooks Youth Hockey Hall of Fame Award will be presented to Matt Olson, from Isanti, Minn. Olson, 23, suffered a spinal-cord injury three years ago that ended his playing career and confined him to a wheelchair. 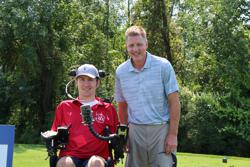 Olson is being honored for his dedication, inspiration, high moral character, and perseverance in rebounding from his injury and continuing his positive contributions to the hockey community. He has maintained a close relationship with the Herb Brooks Foundation. HBF board member Doug Johnson is a close friend, and Olson studied the Foundation as a case study for a college research project. He is an annual attendee at the Golf Classic, and will be accepting his award in person on Monday.