Blaine, Minn. (March 15, 2013) -- Ryan Lundgren, Chris Benson, McKenzie Johnson and Katie Dye were the four 2013 winners of the Herb Brooks Award. The award, which marked its 10th anniversary this year, is presented at the Minnesota State High School Hockey Tournament in Saint Paul. The award is given to the most qualified hockey player in the state tournament who strongly represents the values, characteristics, and traits that defined Herb Brooks. This prestigious award commemorates the enduring influence Herb Brooks has on the sport of hockey in Minnesota and throughout the world. 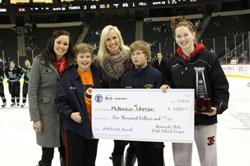 The Herb Brooks Award is supported by the Herb Brooks family, the Minnesota State High School League, the Boys and Girls Hockey Coaches Associations, and the Herb Brooks Foundation. The award is presented on-ice at the Xcel Energy Center on live television on KSTC Channel 45 immediately after the A and AA championship games.

To commemorate the 10th anniversary, two of the original four award winners, Greg Flynn and Molly McDonald, returned to present the award winners on February 23 for the girls, and March 9 for boys.

Lundgren has been an integral part of the Greyhounds’ offense for years. His biggest playoff highlights came in a 3-0 win over Cloquet-Esko-Carlson in the section playoffs where he scored a hat trick, and the Greyhounds’ third place victory in the state tournament where he tallied three assists.

Dye capped an incredible year with a state tournament appearance for the Bluejackets. She had 21 points (11 goals, 10 assists) this year in 30 games as a forward. Dye’s award is the third for Hibbing/Chisholm High School.

Johnson, goaltender for the Eagles, went 21-6-3 in her senior year with a spectacular 1.91 goals-against average. She allowed just four goals in three state tournament games, as she led the Eagles to a 4th place finish.

The Herb Brooks Award selection committee is comprised of current and former high school hockey coaches and other hockey community members with connections to Herb. Herb’s son Dan and his daughter, Kelly Paradise, chair the committee that reviews nominations, observes nominees in state tournament games, and selects the winners. Winners are selected during the third period of the third-place game for each class at each tournament.

Characteristics and values that the selection committee looks for in nominees:
• A true love for hockey — a real passion
• Commitment and loyalty to school, team, and community
• A willingness to sacrifice for the team
• Integrity
• The courage of his/her convictions
• A goal-oriented approach
• A sharp focus and strong competitive drive
• An excellent work ethic
• A willingness to accept challenges
• Mental toughness
• Strong hockey skills
• Strong leadership qualities