Sophomore netminder led nation in goals-against average and save percentage

PHILADELPHIA — Sophomore Connor Hellebuyck of the University of Massachusetts-Lowell has been named the winner of the inaugural Mike Richter Award as the most outstanding goaltender in NCAA men’s hockey. Hellebuyck was presented with the award by Mike Richter at a press conference April 11 at the Wells Fargo Center in Philadelphia, site of the 2014 NCAA Frozen Four.

The Mike Richter Award is sponsored by Let’s Play Hockey Magazine and the Herb Brooks Foundation. 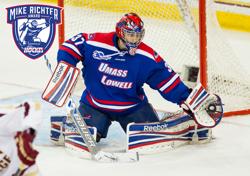 Conner Hellebuyck of UMass-Lowell is the inaugural winner of the Mike Richter Award, which is co-sponsored by the Herb Brooks Foundation.

Hellebuyck led the nation in goals-against average (1.79) and save percentage (.941) for the Hockey East Tournament champion River Hawks. A native of Commerce, Mich., Hellebuyck posted an 18-9-2 overall record and ranked second in the nation with six shutouts this season.

On April 5, Hellebuyck signed an entry-level contract with the Winnipeg Jets, forgoing his final two years of college eligibility. He was a fifth-round pick (130th overall) of the Jets in the 2012 NHL Entry Draft. Hellebuyck is a marketing major at UMass Lowell with a GPA of 3.606.

Hellebuyck’s career save percentage of .946 is the best in college hockey history. Michigan State’s Ryan Miller, the 2001 Hobey Baker Award winner and current St. Louis Blues netminder, posted a .941 save percentage from 2000-02.

After a prep career at Walled Lake Northern High School, Hellebuyck spent one season in net for the Odessa Jackalopes of the North American Hockey League (NAHL). In 2011-12, he played 53 games with a 26-21-5 record, a .930 save percentage, a 2.49 goals-against average and three shutouts. Hellebuyck was named the NAHL’s Co-Rookie of the Year and Co-Goaltender of the Year, and was named the first-team goaltender on the 2011-12 All-NAHL Team.

The other finalists for the 2014 Mike Richter Award were Sam Brittain of Denver, Joel Rumpel of Wisconsin, Adam Wilcox of Minnesota and Clay Witt of Northeastern.

Candidates for the Mike Richter Award were determined by nominations from all 59 NCAA Division I men’s hockey head coaches. The finalists and winner were selected by a committee of coaches, scouts and members of the media.

-Candidates must display outstanding skills on the ice
-Candidates should be in good academic standing at an NCAA college or university
-Consideration should be given to academic achievement and sportsmanship
-Candidates must comply with all NCAA rules; be full-time students at an NCAA college or university; and complete 50 percent or more of the season
-Consideration should be given to the candidate’s activities in the community

After two seasons in the IHL, Richter made his NHL debut in the 1989 Stanley Cup Playoffs with the New York Rangers. Playing full-time for the Rangers beginning with the 1990-91 season, he was a finalist for the Vezina Trophy as the league’s top goalie in just his second full season in the NHL.

After splitting goaltending duties with veteran John Vanbiesbrouck for several seasons, Richter was made the Rangers’ primary starter for the 1993-94 season. He went on to post a career-best 42 wins and 2.57 goals-against average that year as the Rangers won the Presidents’ Trophy as the league’s top regular-season team. In the playoffs, Richter backstopped New York to the Stanley Cup Finals where Rangers defeated the Vancouver Canucks in seven games to win their first Stanley Cup since 1940. During the 1994 Stanley Cup Playoffs, he became the eighth goaltender to post four shutouts in one playoff season.

Consistently ranked one of the world’s best goaltenders, Richter played in 666 games during his 14-year NHL career, all with the Rangers. His 301 wins rank second in Rangers history and he was named an NHL All-Star three times in his career. Richter’s jersey (#35) became the third number retired by the Rangers at Madison Square Garden on Feb. 4, 2004.

Richter was also a standout on the international stage, tending the net for Team USA for parts of three decades. He is one of just 10 Americans ever to compete in at least three Olympic Games (1988, 1998, 2002), including in 2002 when he helped the team capture a silver medal in the last game ever coached by Herb Brooks. In addition, he led Team USA to the World Cup of Hockey championship in 1996 and was named the tournament’s MVP. He also played in two IIHF World Junior Championships (1985-86), three IIHF Men’s World Championships (1986-87, 1993) and the 1991 Canada Cup.

About the Herb Brooks Foundation:

The Herb Brooks Foundation is dedicated to growing the game of hockey and giving the game back to the kids. Founded in 2003 by Dan Brooks and Kelly Brooks Paradise, Herb’s family and friends created the foundation to preserve his legacy by continuing his life’s work by growing the game by “making hockey fun for kids and letting them learn to love the game the way we did.”

Click here to see a PDF of the Mike Richter Award news release.