So a passer-by might have been surprised on a cold day in December to see Coach Joe, as he calls himself, on a basketball court attempting to teach the basics of ice hockey to 30 fifth graders. This was not a team of select hockey players; none of these kids came to Coach Joe with a lick of any hockey experience. 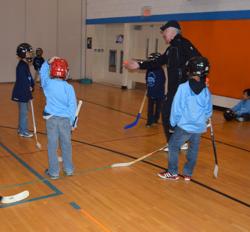 “When the puck moves, you stay right there. Move this way only, not that way. It’s called staying in your lane!”

“When the puck moves, you stay right there,” shouts Coach Joe over the din. “Move this way only, not that way. It’s called staying in your lane!”

Playing your position is just one of the many basic skills that will challenge these kids participating in the Herb Brooks Foundation’s Rink Rats program over the coming months. In addition to the program at the Hmong International Academy in North Minneapolis, where Coach Joe was teaching positioning this day, programs are also held on various days at Lucy Laney, Seward, Dowling, Waite Park, Hale, Jenny Lind, Bancroft, Northrup and Kenny, all Minneapolis elementary schools. A St. Paul program will kick off in January. 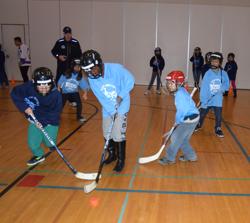 “For our students here, hockey is a totally foreign sport to them. They play soccer, they play basketball, but hockey is different,” says Pheng Her, an instructor with the YMCA after-school program based at the Hmong International Academy. “They see skating on TV, but until this program it’s not something they would be able to do.”

“Rink Rats gives these kids a chance to develop quality relationships with the adult who is teaching the program,” she says. “It’s important for that person to empower them to be the best they can be on the ice and in the classroom.”

“It’s difficult because it’s a new sport for them,” says Her. “We have to teach them everything from scratch. But it lets them know there is more out there than what they are accustomed to doing, which is an important lesson for kids to learn.

The steep learning curve applies to teacher Her as well.

“I have never played hockey,” he admits. “Even though I was born in Minnesota and grew up here, I’ve never even been to a Wild game. So this is a big deal for me too.” 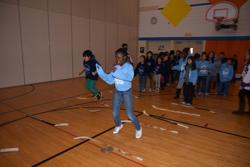 Bounding drills like this reinforce the techniques that will be required when the Rink Rats try skating for real in January.

The students will learn the fundamentals of hockey and teamwork from professional coaches in a floor hockey setting before taking to the ice this winter. Once outdoor rinks are flooded, the skating and ice hockey part of our program begins.

That’s when they become hockey players.

“We work on a lot of body position drills when we’re on dry land,” says Alt. The challenge for them will be having the steel of their blade hit the ice for the first time. They’re going to fall. We do a dry land drill where they have their skates on and they practice falling and getting up. We give them as much preparation as we can, but there is no substitute for actually being on the ice for the first time.

“When they step on the ice, and their skate glides across the ice, their face lights up. It’s magical.” 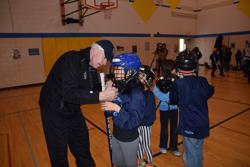 Pheng Her participated in the Rink Rats program last year, and he says the kids’ progress in just three months has to be seen to be believed.

“It’s amazing,” she says. “The first session, they‘re nervous to try something new and they just want to throw a football or basketball. But they grow in the sport. Some of the children even want to progress and join a team.”

But in December, when they’ve not yet been on the ice, and are just learning how to hold a stick or buckle their helmet, the lessons are pretty simple.

“The best thing is playing hockey with the other kids,” says one player. “The only thing I don’t like about it is that at the end of the practice when I take off the helmet my head is all sweaty.” 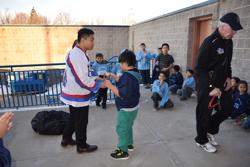 Pheng Her presents the Golden Puck at the end of the session.

The other tradition at the end of every Rink Rats session is the presentation of the golden puck award.

“We give a golden puck award to the kid that has been the outstanding student that day, exhibiting leadership,” says Her. “It gives them an incentive. We gave it to one of our new students today, and he was ecstatic.” 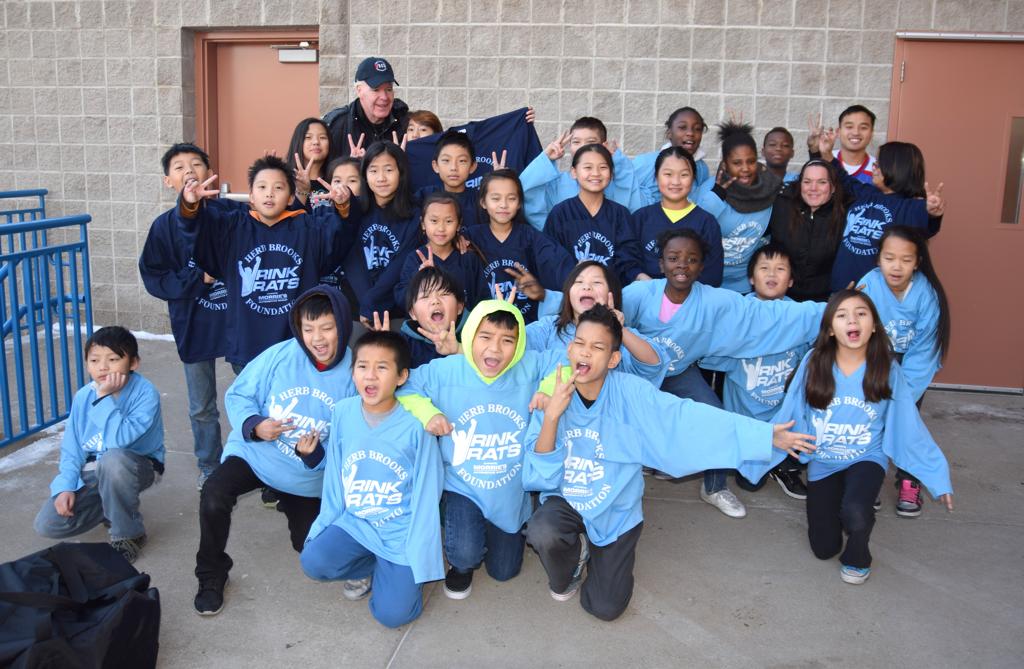