If you have an elementary-age child, and you’ve wrestled with getting ice skates on and off, you’ll appreciate the task facing Amy Alt.

Alt, the director of the Herb Brooks Foundation’s Rink Rats program, was fitting 10 restless kids with skates, getting them prepped to skate on real ice. This group, kids from Waite Park Elementary School in Minneapolis, have been learning hockey skills and group leadership skills on a basketball court for the past month. This day, they were heading onto the outdoor ice at Central Park in St. Anthony Village for the first time this winter. 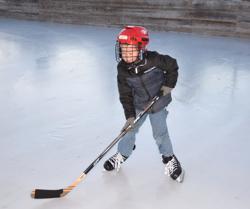 The day they skate on the ice for the first time was a big deal for these 10 kids, and maybe even more so for Alt.

“When they step on the ice, and their skates glide across the ice, their face lights up. It’s magical.”

Rink Rats Coach Amy Alt teaches the kids how to get up after they fall.

A few members of the group were proficient skaters already, but the majority were pure beginners. So once skates were fitted, Alt began the session with a dry land exercise that taught the kids how to get up when they fall.

And fall they did, early and often. Some kids learned that falling could actually be fun, that sliding on the ice was good for a laugh. There were smiles all around. There were making their first steps toward becoming hockey players.

“We have been practicing body position drills on dry land,” says Alt. “But on the ice they’re going to fall. We give them as much preparation as we can, but there is no substitute for actually being on the ice for the first time.”

In addition to Waite Park, Rink Rat programs are also held at Hmong International Academy, Lucy Laney, Seward, Dowling, Waite Park, Hale, Jenny Lind, Bancroft, Marcy Open, Northrup and Kenny, all Minneapolis elementary schools. A new St. Paul program is based at Gustafson Phalen Arena, drawing kids from all over the community. The Rink Rats will skate once a week through the end of February. 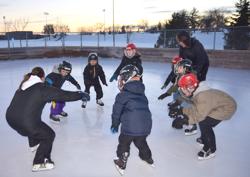 “Rink Rats gives these kids a chance to develop quality relationships with the adult who is teaching the program,” she says. “It’s important for that person to empower them to be the best they can be on the ice and in the classroom.”