BOSTON — Junior Zane McIntyre of the University of North Dakota has been named the winner of the 2015 Mike Richter Award as the most outstanding goaltender in NCAA men’s hockey. McIntyre was presented with the award by Mike Richter at a press conference today at TD Garden in Boston, site of the 2015 NCAA Frozen Four.

The Mike Richter Award is co-sponsored by Let’s Play Hockey and the Herb Brooks Foundation. 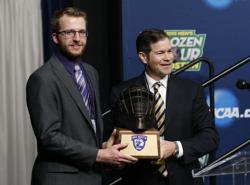 A native of Thief River Falls, Minn., McIntyre posted a 29-10-3 record and played in all but 43 minutes this season in backstopping UND to its second consecutive NCAA Frozen Four. His 29 wins led the nation and were one short of a new North Dakota single-season record. McIntyre was the NCHC Goaltender of the Year, a member of the NCHC All-Conference First Team and a finalist for the Hobey Baker Award.

A two-time selection to the Academic All-NCHC Team, McIntyre is a psychology major at UND and owns a GPA of 3.26. Actively involved in the community, McIntyre has devoted more than 40 hours of his time to various organizations, including Special Olympics, Grand Forks Youth Hockey Association, Westside Elementary, Thief River Falls Elementary and more.

After a standout prep career at Thief River Falls High School, McIntyre was named the winner of the 2010 Frank Brimsek Award, honoring the top senior goaltender in Minnesota high school hockey. He next played two seasons in the USHL with the Fargo Force, earning the league’s 2011-12 co-Goaltender of the Year Award. During his time in Fargo, McIntyre posted a 40-24-4 record with a 2.22 goals-against average, a .917 save percentage and nine shutouts. He also won gold and bronze medals at the 2010 and 2011 World Junior A Challenges.

The other finalists for the 2015 Mike Richter Award were Kyle Hayton of St. Lawrence, Jake Hildebrand of Michigan State, Alex Lyon of Yale and Jamie Phillips of Michigan Tech.

Candidates for the Mike Richter Award were determined by nominations from all 59 NCAA Division I men’s hockey head coaches. The finalists and winner were selected by a committee of coaches, scouts and members of the media.

- Candidates must display outstanding skills on the ice

- Consideration should be given to academic achievement and sportsmanship

- Candidates must comply with all NCAA rules; be full-time students at an NCAA college or university; and complete 50 percent or more of the season

The inaugural winner of the Mike Richter Award was Connor Hellebuyck of UMass Lowell, now the top goalie for the AHL’s St. John’s Ice Caps.