Volunteers divided the outdoor sheet of ice at the Rec Center into eight sheets for three-on-three games with no goalies. All players were 6, 7 or 8 years old. A total of 116 games were played over the course of the weekend. 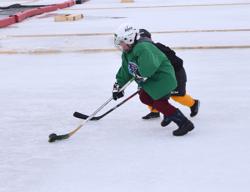 As temperatures warmed into the 40's on Sunday afternoon, the tournament changed over to boot hockey -- and fun hockey was still had by all!

In addition to teams from the Twin Cities area, the tournament drew teams from Austin, Red Wing, Pine City, and Moose Lake, Minn.; Wahpeton, N.D.; and Hudson and Baldwin, Wis.

The Herb Brooks Foundation was an active partner in organizing the festival.

Herb Brooks Foundation Executive Director John McClellan gave credit to Pastor Jarvis Glanzer of the Watermark Church in Stillwater for providing a crew of enthusiastic volunteers to set up the venue and keep the tournament running smoothly. The church embraced the tournament as a community outreach opportunity, and even hosted a Hockey Sunday event at their regular Sunday service with appearances by Bill Butters, Jim Boo and Jack Carlson.

“Some of Pastor Glanzer’s volunteers came from Illinois and St. Cloud as well as local volunteers from Stillwater, and they all were a pleasure to work with,” said McClellan.

Mild weather graced the weekend. In fact as the temperature rose into the low 40’s on Sunday afternoon, soft ice on the natural surface forced organizers to shift over to boot hockey.

The driving force behind the tournament came from the tournament director Jim Boo, who envisioned a community hockey festival with plenty of activities and events to keep players and coaches busy. He certainly achieved that.

From Governor Mark Dayton, who participated in a ceremonial puck drop, to clinics by Bill Butters and 1992 track and field Olympian Ron Backes, appearances by 1980 Olympic gold medalists Rob McClanahan and Dave Christian, a showing the movie “Miracle,” and even a Heroes Boot Hockey Game featuring members of the Stillwater Police and Fire Departments, Lakeview Emergency Responders, and local military veterans.

Bob and Angela Eastman, of Events by Eastman, Inc. managed many of the logistical details of the festival.

Proceeds will benefit the Herb Brooks Foundation, whose mission is to make hockey accessible and affordable to all kids. The Foundation has been running highly popular “Rink Rats” programs throughout the fall and winter in both Minneapolis and St. Paul. The Rink Rats program targets kids who normally wouldn’t have access to traditional hockey programs, providing free equipment and coaching.