For a group of young hockey players from Saint Paul, a Sunday afternoon in February turned into a dream hockey field trip.

Thanks to a ticket donation from the Minnesota Wild and the National Hockey League, the Herb Brooks Foundation (HBF) treated 23 kids participating in the HBF’s Rink Rats learn-to-skate program to front row seats at the Minnesota Wild vs. Chicago Blackhawks outdoor stadium game at TCF Bank Stadium in Minneapolis, February 21.

Front row seats at TCF Bank Stadium, thanks to the NHL and the Minnesota Wild.

With temperatures in the 30’s, a soft snow globe-like snow shower to herald the puck drop, and even some sunshine later in the game, it was an afternoon made for lifetime memories.

“It was a memorable experience for the kids, fun and exciting,” said Amy Alt, the HBF’s Rink Rats Director.

Alt was assisted at the game by seven officers from the Saint Paul Police Athletic League, who volunteered as chaperones on their day off. The officers already knew the kids; they are also volunteering as hockey coaches at the two weekly Saint Paul Rink Rats clinics, at Phalen and Harding Ice Arenas.

As the NHL does with all their outdoor stadium games, the game was more than a game. It was an event.

A jet flyover, fireworks, a live performance by Cheap Trick at intermission. And 50,000 fans packed into a football stadium. It helped a lot that the Wild won the game going away 6-1.

“I asked them what their favorite part was, and they said seeing the Wild win and seeing “Wild Win” on the big screen,” said Alt. “They also liked getting to know the police officers and then sitting next to the police officers at the game. We made sure they paired up.

“A lot of kids mentioned that they loved the jet flyover. They’d never seen anything like that before. The jets flew over, then the Wild scored in the first two minutes. The kids all jumped up and screamed. It was really cute. And they liked dancing during the Cheap Trick performance.”

Jack White, who formerly worked as a studio cartoonist with Hanna Barbera, and worked as a skating instructor for the cast of the Mighty Ducks movies in the 1990’s, also volunteered as a chaperone. White lives in Florida, but returns to the Twin Cities for family visits. When he does he volunteers as a coach for the Rink Rats program. At the game, he presented each of the kids with a cartoon commemorating the occasion. 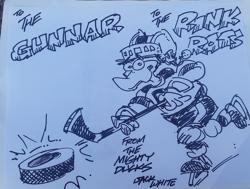 One of Jack White's commemorative cartoons.

“In their Rink Rats jerseys, everyone thought they were a youth hockey team,” said Alt. “They felt really special. They were all so well received. It felt like we were part of the big Minnesota hockey family.”