TAMPA, FLA. — Junior Thatcher Demko of Boston College has been named the winner of the 2016 Mike Richter Award as the most outstanding goaltender in NCAA men’s hockey. Demko was presented with the award by Mike Richter in Tampa, Fla., site of the 2016 NCAA Frozen Four.

The Mike Richter Award is co-sponsored by the Herb Brooks Foundation and Let’s Play Hockey magazine. 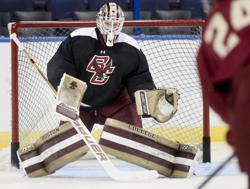 A native of San Diego, Demko backstopped the Eagles to a share of the Hockey East regular season championship and a berth in the NCAA Frozen Four while posting a 27-8-4 overall record. He leads the nation with 10 shutouts and ranks third in wins (27), tied for fourth in save percentage (.935),  fifth in winning percentage (.744), and eighth in goals-against average (1.88).

A finalist for the Hobey Baker Award, Demko played in all but two games this season for the Eagles, allowing two goals or less 22 times. He stopped 30 or more shots in 15 games this season, and posted a .930 or better save percentage in 19 games. Demko’s school-record 10 shutouts were the second most in college hockey history for a season, tying David McKee (Cornell, 2005) and Ryan Miller (Michigan State, 2001), and he is two shutouts away from tying Cory Schneider’s (2004-07) benchmark of 15 for the BC career record.

The other finalists for the 2016 Mike Richter Award were Kevin Boyle of UMass Lowell, Cam Johnson of North Dakota, Charlie Lindgren of St. Cloud State and Alex Lyon of Yale.

Candidates for the Mike Richter Award were determined by nominations from all 60 NCAA Division I men’s hockey head coaches. The finalists and winner were selected by a committee of coaches, scouts and members of the media.

After two seasons in the IHL, Richter made his NHL debut in the 1989 Stanley Cup Playoffs with the New York Rangers. Playing full-time for the Rangers beginning with the 1990-91 season, he was a finalist for the Vezina Trophy as the league’s top goalie in just his second full season in the NHL.

After splitting goaltending duties with veteran John Vanbiesbrouck for several seasons, Richter was made the Rangers’ primary starter for the 1993-94 season. He went on to post a career-best 42 wins and 2.57 goals-against average that year as the Rangers won the Presidents’ Trophy as the league’s top regular-season team. In the playoffs, Richter backstopped New York to the Stanley Cup Finals where Rangers defeated the Vancouver Canucks in seven games to win their first Stanley Cup since 1940. During the 1994 Stanley Cup Playoffs, he became the eighth goaltender to post four shutouts in one playoff season.

Consistently ranked one of the world’s best goaltenders, Richter played in 666 games during his 14-year NHL career, all with the Rangers. His 301 wins rank second in Rangers history and he was named an NHL All-Star three times in his career. Richter’s jersey (#35) became the third number retired by the Rangers at Madison Square Garden on Feb.  4, 2004.

Richter was also a standout on the international stage, tending the net for Team USA for parts of three decades. He is one of just 10 Americans ever to compete in at least three Olympic Games (1988, 1998, 2002), including in 2002 when he helped the team capture a silver medal in the last game ever coached by Herb Brooks. In addition, he led Team USA to the World Cup of Hockey championship in 1996 and was named the tournament’s MVP. He also played in two IIHF World Junior Championships (1985-86), three IIHF Men’s World Championships (1986-87, 1993) and the 1991 Canada Cup.

About the Herb Brooks Foundation:

The Herb Brooks Foundation is dedicated to growing the game of hockey and giving the game back to the kids. Founded in 2003 by Dan Brooks and Kelly Brooks Paradise, Herb’s family and friends created the foundation to preserve his legacy by continuing his life’s work by growing the game by “making hockey fun for kids and letting them learn to love the game the way we did.”