“We wanted to create over 1,000 opportunities for kids to be exposed to the great sport of hockey,” said McClellan.

The Foundation defines an “opportunity” as one child participating in one program. Some children participate in multiple programs. For example some of the participants in the Rink Rats Program, a winter after school program, also sign up for a Spring Clinic, in March and April.

The mission of the HBF is to grow the game of hockey. And the Foundation runs varied programs to accomplish that goal. Here are some examples:

The core program is Rink Rats, an after-school program in Minneapolis and Saint Paul that introduces hockey to inner-city kids who otherwise would not be exposed to the sport. The Herb Brooks Foundation provides skates, sticks, helmets and qualified coaches, all for free.

Thanks to the support of the National Hockey League, the Foundation treated 25 youth players to a field trip to attend the Minnesota Wild vs. Chicago Blackhawks Stadium Series Game at TCF Bank Stadium, February 21. 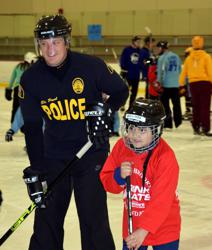 Forty-seven Rink Rats participated in a learn-to-skate and learn-to-play hockey clinic at Parade Ice Garden In Minneapolis in April. Another 60 kids filled the rink at the Vadnais Sports Center for three weeks in April at the HBF Spring Clinic, where the coaches include police officers from the Saint Paul Police Athletic League and the University of Minnesota Women’s Hockey Team. NBC Sports shot a story at one of the Saint Paul Spring Clinic events, to run during their Stanley Cup playoff coverage. They even brought the Stanley Cup to the arena so the kids could pose for photos with the most famous trophy in hockey. 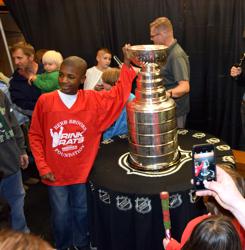 NBC Sports arranged for the Stanley Cup to make a special appearance at the Vadnais Spring Clinic.

“Looking to the future, our challenge will be to secure the necessary resources to allow these programs to continue growing at a manageable pace,” said McClellan. “The challenge for Director Alt will be to keep the programs staffed and managed with quality coaches.

“We’re really proud that we’ve been able to introduce so many kids to a new sport, and to teach valuable life skills,” said Alt.