The Herb Brooks Foundation’s annual Celebrity Golf Classic is the most important annual fund raiser for the Foundation. But it has also developed into a who’s who of North American hockey, with numerous NHL and college players and coaches attending the various events, as well as members of the 1980 Olympic Team

The 9th annual event is scheduled for Friday June 17, 2016, at Victory Links Golf Course on the campus of the National Sports Center in Blaine. Proceeds raised by the tournament will support the Foundation’s mission to grow the game of hockey. Over 120 golfers are expected to play, with additional attendees participating in the banquet that follows the golf tournament. 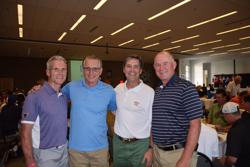 The list of hockey celebrities who will be attending the event will be announced closer to the event, in early June.

The 2016 Hall of Fame honoree will be Steve "Moose" Younghans, who has been a fixture in the St. Paul Johnson hockey community since 1979.  A highly successful youth hockey coach, his Bantam A teams made 11 State Tournament appearances and took home three State Championships in 1982, 1989, and 1992.  He served on the Johnson Youth Hockey Association Board of Directors in every position for over 30 years.

He took over as the bench boss for the St. Paul Johnson Governors in 1993 where he led his team to the State Tournament in 1995.  Moose was honored as Section Coach of the Year in 1995, and again in 2009.  He was voted as the John Mariucci Coach of the Year in 1995 at the Class AA level.  And he added the Don Clark Lifetime Achievement Award from Minnesota Hockey in 2010 to his long list of achievements.

Younghans returned to coach the Johnson Bantam A team from 2007-2009 while still coaching the Varsity team at St. Paul Johnson high school.  In addition, he is a founding member for the Johnson-Como Hockey Association.

Coach Younghans has made a lasting impact on his community and the kids who play hockey in St. Paul.

Last year’s Hall of Fame winner was Bill Butters, a Minnesota hockey icon who played in the World Hockey Association, National Hockey League and coached at various levels. After retiring from hockey, Butters has assumed a leadership role with Hockey Ministries International and in that role has mentored many young hockey players.

What: the major fund-raiser for the Herb Brooks Foundation and a significant gathering of hockey celebrities.

Where: Victory Links Golf Course, on the campus of the National Sports Center in Blaine.

Cost for golf: $880 per foursome, $220 per individual (price includes all the on-course games.)

To register and sponsorship information: http://bit.ly/1QT40cq