Blaine, Minn. (June 17, 2016) -- The Herb Brooks Foundation’s (HBF) presented their annual Hall of Fame Award for 2016 to Steve "Moose" Younghans, who has been a fixture in the St. Paul Johnson hockey community since 1979.  A highly successful youth hockey coach, his Bantam A teams made 11 State Tournament appearances and took home three State Championships in 1982, 1989, and 1992.  He served on the Johnson Youth Hockey Association Board of Directors in every position for over 30 years.

The award was presented at a banquet following the annual Herb Brooks Foundation Golf Classic, which was held at Victory Links golf course, on the campus of the National Sports Center in Blaine, Minn. The Hall of Fame Award honors those individuals who have significantly contributed to growing the game of hockey, the mission of the Herb Brooks Foundation. 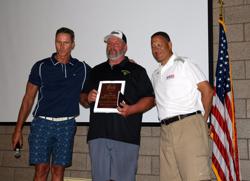 Younghans took over as the bench boss for the St. Paul Johnson Governors in 1993 where he led his team to the State Tournament in 1995.  He was honored as Section Coach of the Year in 1995, and again in 2009, and was voted as the John Mariucci Coach of the Year in 1995 at the Class AA level.  And he added the Don Clark Lifetime Achievement Award from Minnesota Hockey in 2010 to his long list of achievements.

Younghans returned to coach the Johnson Bantam A team from 2007-2009 while still coaching the Varsity team at St. Paul Johnson high school.  In addition, he is a founding member of the Johnson-Como Hockey Association.

Coach Younghans has made a lasting impact on his community and especially to the kids who play hockey on the East Side of St. Paul.

“We might not be winning championships like we used to,” said Younghans in his acceptance speech, “but we are graduating champion kids, who grow up to be great citizens.”

“We just celebrated out 100th anniversary two years ago,” he said. “We had 250 past players come to the celebration. We had five games, from five different eras. Games were going on all day long. People were hugging and celebrating. That’s how much that program meant to them.

“East Side people loved the program and still do.”

Younghans concluded his remarks with a tribute to another East Side legend, Herb Brooks.

“My favorite line is Herbie’s own,” he said. “I’m just a guy from the East Side.”