Any proceeds after expenses will benefit the Herb Brooks Foundation to further its mission to make hockey accessible and affordable to all kids. The Foundation has been running highly popular “Rink Rats” programs throughout the fall and winter in both Minneapolis and St. Paul. The Rink Rats program targets kids who normally wouldn’t have access to traditional hockey programs, providing free equipment and coaching. 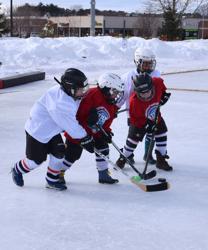 Spirited action on the final day of the 2016 Sticks in Stillwater mite hockey festival. Warm temperatures made for soft ice on the outdoor rinks, necessitating a shift to boot hockey.

Fifty-two mite teams from the metro Twin Cities, Greater Minnesota, Wisconsin and North Dakota will participate in the three-day event. All players are 6, 7 or 8 years old. There will be 104 mite games played over the course of the weekend. Games will be three-on-three, with no goalies, on smaller sheets of ice. Eight sheets of outdoor ice will be configured at the Recreation Center.

The games start at 9 a.m. Saturday, and the festival will wrap up on Sunday afternoon.

A "Blue vs Green" Heroes Boot Hockey Tournament will be held at 4:15 p.m. Saturday at the St. Croix Valley Recreation Center. The game will feature local police, fire, EMT and military personnel.

All tournament parking will be at Stillwater Junior High School, with non-stop free shuttle buses transporting players and fans to the St. Croix Valley Recreation Center. There will be no Sticks in Stillwater parking at the Recration Center.