Blaine, Minn. (January 26, 2017) – The Herb Brooks Foundation announced that it will donate the original Herb Brooks statue to the National Sports Center (NSC) in Blaine, Minn. The original six-foot tall statue, which was located at 317 Washington Street, at Rice Park, adjacent to the Xcel Energy Center, was recently replaced by a larger statue. 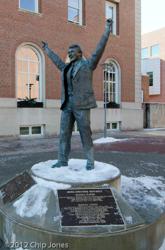 The National Sports Center intends to locate the statue at the entrance to the Schwan Super Rink, which may be the busiest hockey venue in the State of Minnesota. The eight-sheet ice facility welcomes over two million visitors annually. The facility serves youth, high school and college hockey, figure skating, short-track speedskating, broomball, learn-to-skate programs, and theme skate events.

“Our family believes the NSC is a perfect location,” said Dan Brooks, Herb Brooks’ son. “The Schwan Super Rink is probably the busiest hockey venue in the State of Minnesota, and this location will present an opportunity to educate future generations of young hockey players about my father’s legacy and how he changed hockey in Minnesota, and across the country.”

The connections between Herb Brooks and the Minnesota Amateur Sports Commission and the NSC are authentic.

Brooks served on the board of the Minnesota Amateur Sports Commission (MASC) from 1988 to 1993, and again from 1999 to his passing in 2003. He was instrumental in helping the MASC build legislative support for the original Mighty Ducks Ice Arena Grant Program in 1995. Over a six year period, ending in 2000, this grant program awarded over $18 million in grants to help the construction and renovation of Minnesota ice arenas, resulting in the construction of 61 new sheets of ice across the state. The increased supply of ice facilitated an unprecedented growth in female hockey and other ice sports.

As a member of the MASC, Brooks actively promoted the development of the National Sports Center, even before an ice arena was built on the campus. He was tireless in his support of all youth sports, not just ice sports.

Brooks also provided invaluable support to then-Minnesota Amateur Sports Commission Executive Director Paul Erickson in bringing partners on board to build the Schwan Super Rink at the National Sports Center, which opened in 1998 with four sheets of ice and expanded to eight sheets in 2006. Included in the Super Rink is the Herb Brooks Training Center, a dry-land hockey training facility that is a tribute to Brooks’ long-standing advocacy for off-ice hockey training.

The timeline for the installation of the statue is up in the air. The statue has been cleaned and is currently in storage.

“We would like to design a build-out to the front of the Super Rink, to build a proper location for the statue to reside,” said Pete Carlson, the Schwan Super Rink’s Operations and Programming Director. “This provides us a great opportunity to build an educational exhibition that supports the statue and helps future generations of hockey players learn about Herb Brooks and his important legacy.”

The NSC is working on some vision plans for the new build-out and is undertaking preliminary financial planning to determine funds that would need to be raised.