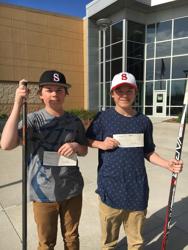 The Kraus brothers, 15, have been playing hockey for five years, and the sport is their passion. They have been playing in the St. Mary’s Point Hockey Association. Their single parent, father John Gartner, has suffered some serious occupational injuries and is unable to work full-time. Due to the financial hardships faced by the family, the boys have received some past help from Youth Advantage, which donated hockey equipment, and also from some private donations in the Stillwater area.

The $500 scholarship received by each Zach and Zane will go to into the family’s hockey expense fund, so the brothers can continue to play the sport they love.

“I just finished playing my second year of bantams at St. Mary’s Point Hockey Association,” wrote Zack Kraus in his scholarship application. “My hockey and school success depends on positive role models like my coaches, and the friendships I build with my teammates.”

“I am requesting $500 from the Herb Brooks Foundation to support me in hockey because this award will let me keep playing, and it makes a meaningful difference for me and my dad,” wrote Zane Kraus. “This amount will help cover part of my hockey costs for next season. My choices will be U16, Junior Gold, or to try out for the JV team at Stillwater Area High School. All require higher costs than my dad has ever been required to pay before. I want to keep playing hockey.”

The purpose of the Herb Brooks Scholarship Fund is to grow the game of hockey by providing financial help to players and teams for the advancement of individual and team skills. Scholarships are awarded annually in the spring.

“The Herb Brooks Foundation is proud to provide this financial support to Zach and Zane Kraus,” said Herb Brooks Foundation Executive Director John McClellan. “The mission of the Foundation is to grow the game of hockey. Sometimes the best way to grow the game is to invest in passionate players who love the game and just want to keep playing. Who knows what kind of leadership roles Zach and Zane might play in the future to grown the game? That’s an investment we are proud to make.”