Blaine, Minn. (June 5, 2017) – The Herb Brooks Foundation (HBF) will induct the Brodt Family into the HBF Youth Hockey Hall of Fame at this year’s annual HBF Golf Classic, honoring the family’s long-standing commitment to the development of hockey in Minnesota. Jack, Vic, Kerry, Winny, and Chelsey Brodt will be honored at an awards luncheon at 12:00pm on June 16 at the Welcome Center of the National Sports Center in Blaine, Minnesota.

Members of the Brodt family have been involved with hockey in Minnesota for decades, with generations of Brodts contributing to a rich hockey tradition in Roseville, a Twin Cities suburb. Whether playing mites, peewees, bantams, high school, collegiate, professional, or international, the Brodts have solidified themselves as a vital piece of Minnesota’s storied hockey history.

Jack Brodt, the senior leader of the Brodt clan, played hockey for Alexander Ramsey High School, and has been a staple of the Roseville community since 1962. Much has changed since Jack’s playing days at Alexander Ramsey, including the name of the school, which later became Roseville Area High School.

“My whole high school career was played outside at the rink at Alexander Ramsey High School,” Jack said. “When I was playing it was all outdoors at the local playgrounds or Como Lake.”

Jack still actively plays hockey himself, in addition to supporting his children who have carved their own names into Minnesota hockey lore. “Hockey is something that you can do all your life. It’s just the enjoyment of playing the game itself that kept my wife and myself and all my kids interested,” Jack commented.

Jack and his wife, Marlene, can be assigned responsibility for much of the hockey talent in the Brodt lineage. 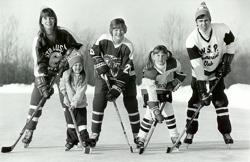 “We started them off skating when they were about 18 months old,” Jack said. “My wife would take them every single day, she’d take them Monday to Friday then I’d take them Saturday and Sunday. In the winter they skated every day.”

The road was not always smooth for the Brodt children, but their persistence paid off and the on-ice skills they developed at a young age kick started their successful hockey careers.

“Sometimes they weren’t real happy about skating, but once they figured it out they were six or seven years old and had been skating for four years. They were pretty good skaters for their age group at that point,” Jack added.

“I played for him in 1987, just seven years after the Miracle on Ice,” Vic said.  For Vic, Brooks’ coaching was more than just on-ice strategy.  “It goes beyond the X’s and O’s. Obviously he knew the game in and out, but it was the little things that I’ll remember, the little comments and the Brooks-isms,” Vic said.

Following his playing career, Vic switched to the coaching side of hockey, taking the reins first in youth hockey in Roseville before accepting the job as Roseville Area High School head girls’ hockey coach. He incorporated much of what he learned in his year with Brooks into his own coaching style.

While at Roseville, Vic was able to coach his daughter, Hanna, who played forward for the Raiders from 2008 to 2012. The Brodt duo captured a Minnesota Class AA State Championship in 2010.

“It was probably one of the greatest times I’ve had coaching. People don’t often get that opportunity, it was fantastic,” Vic said.

Despite his primary relation as father, Vic did not alter his coaching of Hanna, or succumb to nepotism and favoritism.

“My daughter was a hard worker, I didn’t treat her any different. She was Brodt, she wasn’t Hanna,” Vic said. “When I got home at night, she was my daughter. I tried to create that separation.”

Hanna would continue her hockey career at St. Cloud State, a school with ties beyond just her father. Hanna’s aunt and Vic’s eldest sister, Kerry, was the first head coach of the St. Cloud State women’s hockey team. Kerry coached the Huskies for four seasons and was voted the WCHA Coach of the Year in the 2001 season.

Kerry has helped preserve the Brodt legacy in the current class of youth hockey talent. Two of Kerry’s daughters, Madeline and Audrey Wethington, play varsity girls’ hockey at the Blake School, where they picked up the 2017 Class A Minnesota state high school title as teammates. Madeline has already committed to continue her playing career at the University of Minnesota, another school with strong ties to the Brodt family. 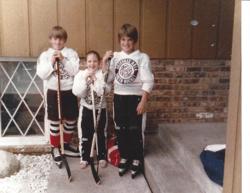 Both Winny and Chelsey Brodt played college hockey for the University of Minnesota Golden Gophers. The two Roseville Area High School standouts teamed up for one season (2002/03), when Winny was a senior and Chelsey a freshman.

“Things happen for a reason, and that was one of those things. We’re six years apart, so we never thought we would ever actually be on any teams together,” Winny said.

Winny has been a pioneer in Minnesota women’s hockey from a young age. High-level girls’ hockey did not exist when Winny was growing up, forcing her to play with the boys for much of her youth career.

“When I was four years old and playing hockey there were no (women’s) college programs, there were no scholarships, there was no women’s Olympic team. Nothing,” Winny said.

Eventually, girls’ high school programs surfaced in the State of Hockey. Winny earned the state’s first Minnesota Ms. Hockey Award in 1996 in her senior year of high school by leading her Roseville squad to an undefeated season and state championship.

Upon graduation, Winny ventured east to the University of New Hampshire, where she had an immediate impact on the ice. The New Hampshire Wildcats won the inaugural AWCHA National Championship and Winny was selected as the MVP of the post-season tournament. After transferring to her hometown Gophers, Winny picked up another accolade by winning the University of Minnesota’s first women’s hockey national championship in 2000. Winny’s Gophers’ career was extended due to obligations with the U.S. Women’s National Team, where she played in several IIHF World Championships. Today, Winny is on the executive board of the HBF, aiming to preserve Brooks’ legacy and instill his philosophy onto a new generation of hockey players.

Chelsey similarly brought glory to her home city and state many times in her playing career. Chelsey earned a Minnesota High School State Championship of her own in 1999, and was selected to the all-Metro team three consecutive seasons to represent Roseville Area High School. She capped off her high school career as a finalist for the Minnesota Ms. Hockey Award in her senior year.

Chelsey would play a vital role in two national championships for the Golden Gophers, when the team seized back-to-back titles in 2004 and 2005. Chelsey finished her four-year University of Minnesota career with 43 total points, 36 of which were assists. 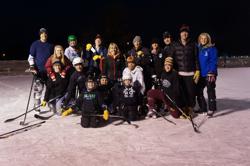 The significant age gap between the Brodt siblings provides an interesting dynamic within the family.

“There is a big separation in age among all our siblings,” Vic said. “It was less about competing but more about looking up at each other. When I got older it was fun to watch my sisters continue the game, and being a cheerleader for them.”

Although clearly supportive of her siblings’ careers and passions, Winny sees a definite competitive fire in the Brodt family. “We are just competitive in nature. Whether it’s just running to the car first, or getting shotgun. We are just wired to be competitive, and maybe that brought along some of the success we had in hockey,” Winny said.

Winny graduated from Minnesota in 2003, but her passion for the game prohibited her from abandoning the sport she loved. In 2004, Winny created Os Hockey, a training program for high school girls’ hockey players that has developed much of the top talent in the state since its inception. After her own collegiate career, Chelsey was hired onto the staff of Os Hockey as an instructor for on and off ice programming, where she still works today.

“My whole mission was that girls deserve to have the best coaching and the best ice time available,” Winny said. “I had a full time job but I still wanted to be involved in the game. I saw that there weren’t enough opportunities for girls, the right opportunities. All my programming is based on what I would have liked to do back in the day, that I didn’t have the opportunity to do.”

Winny and Chelsey have teamed up on another endeavor: The Minnesota Whitecaps. The Whitecaps are a professional women’s hockey team founded in 2004 by Jack Brodt to provide an opportunity for his daughters to continue playing hockey at a competitive level after they graduated college. Both Chelsey and Winny have played for the team since their respective graduations, and are still on the active roster of current and former national team players and college stars. 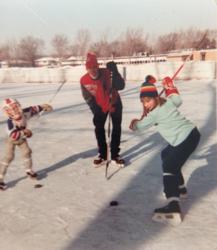 The Brodts are hoping that the NHL will soon back professional women’s hockey financially, fueling a needed expansion of the game in the United States.

“That’s where I wish Herb (Brooks) was still around, he is one that would be helping get the girls game to the level where the NHL would jump on board and help out,” Winny said. “I think it’s going to happen one day, I just don’t know when it is.”

“The girls’ game is enjoyable and when people go and watch it, they appreciate it at the level that it is, especially the young players that are coming up right now. It’s pretty impressive,” Winny continued.

The Brodt influence in hockey is immense, and it looks to only be gaining momentum. The Brodts will continue to progress the game by giving back to the hockey community and ensuring Minnesota hockey is progressing in the right direction.

With the upcoming Brodt generation already thriving on the ice, the family’s legacy looks set in stone for years to come.

“Hockey has been such a positive thing. You want to share that with your kids, and give them an opportunity and hopefully they pass it on to their kids,” Vic said.

“I think that we’ll always have a hand in hockey. Whether it’s giving back and coaching, or having our kids play. It’s just in our blood. We’ve made it an enjoyable experience and I think we will always be a part of it,” Winny concluded.