Blaine, Minn. (June 16, 2017) – The Herb Brooks Foundation (HBF) hosted its most important fundraiser, the HBF Golf Classic, on June 16. The HBF inducted the Brodt Family into the HBF Youth Hockey Hall of Fame at this year’s annual Golf Classic, honoring the family’s long-standing commitment to the development of hockey in Minnesota. Jack, Vic, Kerry, Winny, and Chelsey Brodt were given the award at a luncheon at the National Sports Center in Blaine, Minnesota.

The Brodt family has made a tremendous impact by growing the game of hockey in Minnesota, with family members achieving excellence at the youth, high school, collegiate, professional, and even international level. The Brodts have an accomplished history in many generations of Minnesota hockey, and continue to influence the progression and development of Minnesota’s top hockey talents today.

Vic Brodt, the oldest of the Brodt children, played high school hockey for Alexander Ramsey High School, after which he played college hockey for the St. Cloud State Huskies. During his freshman season (1986) for the Huskies, Vic played under legendary coach Herb Brooks. Following his collegiate career, Vic took over as the head women’s hockey coach at Roseville High School where he led his team to the 2010 Class AA state title. Vic’s daughter, Hanna, played on the 2010 State Champion team.

Kerry Brodt-Wethington was hired as the first women’s hockey coach at St. Cloud State following her own successful professional career. Brodt-Wethington served for four seasons and was selected as WCHA Coach of the Year in 2001. Two of Kerry’s daughters, Madeline and Audrey, currently play varsity hockey at the Blake School and are fresh off their victory in the 2017 Minnesota Class A State Hockey Tournament.

Winny Brodt-Brown has been a pioneer in Minnesota women’s hockey from a young age. Brodt-Brown earned the state’s first Ms. Hockey Award in 1996 in her senior year for Roseville High School following an undefeated season. She picked up the inaugural AWCHA National Championship title with the University of New Hampshire in 1997 and would hoist the National Championship trophy again for her hometown University of Minnesota Golden Gophers in 2000. She was a consistent fixture on the United States Women’s National Hockey Team from 1996 to 2006.

Chelsey Brodt-Rosenthal strengthened the Roseville Area High School girls’ hockey dynasty by winning a state championship of her own in 1999. Chelsey joined her older sister Winny at the University of Minnesota, where the duo would play one season together in 2002/03. Brodt-Rosenthal finished her college career as a two-time national champion.

In 2004, Winny founded Os Hockey, a training program that has developed much of the state’s top girls’ hockey talent. Chelsey is on staff as an instructor for the program. “My whole mission was that girls deserve to have the best coaching and the best ice time available,” Winny said. “It’s been super fun for me to see the game grow and help with the program to get the girls the right exposure, the right training, and the right coaching.”

Jack Brodt, father of Winny, Chelsey, Vic, Tony, and Kerry, founded the Minnesota Whitecaps in 2004, seeking to provide an opportunity for his daughters to continue playing the sport they loved after graduating from college. Both Winny and Chelsey are still active on the Whitecaps’ roster that consists of current and former national team players, and college stars. 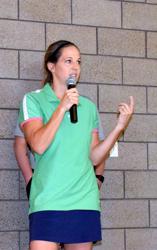 In her acceptance speech on behalf of the Brodt family, Winny remembered the impact of legendary coach Herb Brooks upon her own family and Minnesota hockey generally.

“The ‘Brooks’ name has been a household name in our kitchen since I was seven years old, when my brother went to play for Herb,” Winny said.

Winny attributed much of the development of Minnesota women’s hockey to the influential power of Brooks.

“It’s because of Herb that all these girls are playing hockey today, because he pushed it at the collegiate level. It needed to be pushed,” Winny said. “All these players that I’ve coached, I’ve been able to do that because of Herb.”

The Brodt hockey tradition is immense, and the impact the Brodts have had on the Roseville community and Minnesota hockey in general is tremendous.

“Hockey’s just in our blood. We’ve made it an enjoyable experience and I think we will always be a part of it,” Winny concluded.