Blaine, Minn. (August 7, 2018) -- The Herb Brooks Foundation’s (HBF) presented their annual Hall of Fame Award for 2018 to Bob Suter. Suter was a member of the 1980 Miracle on Ice Olympic gold medal-winning hockey team that was coached by Herb Brooks.

The award was presented posthumously. Bob Suter died on September 9, 2014, of a heart attack. He was the first player on the 1980 team to pass away. The team's coach, Herb Brooks, died in an auto accident in August 2003. 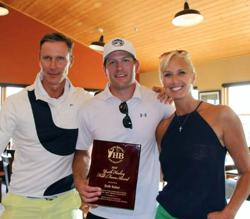 Ryan Suter was joined at the award ceremony by Herb Brooks' children, Dan, left and Kelly.

“My dad is probably upstairs with Herbie right now,” said Ryan Suter. “They’re both probably smiling and wondering what the big deal is.”

“When my dad was alive I really didn’t appreciate all the people he was able to help, and to give a chance to play hockey. And even if they didn’t play hockey to just put on skates and get out and skate. Now that he’s gone I’m finding out all the cool things he did and stood for. His big thing was that it’s all about the kids.”

After winning the gold medal, Bob Suter signed with the Minnesota North Stars in 1981, but retired in 1982 without playing any NHL games.

The award was presented at the annual Herb Brooks Foundation Golf Classic, which was held at Victory Links golf course, on the campus of the National Sports Center in Blaine, Minn. The Hall of Fame Award honors those individuals who have significantly contributed to growing the game of hockey, the mission of the Herb Brooks Foundation.

Suter's Gold Medal Sports was the hub of youth hockey in the Madison area and was a big contributor to the development of arenas and hockey programs which reached out to players of all skill levels, not just the elite athletes.

Click here to download and view a Fox9 news story that includes an interview with Ryan Suter.