The National Sports Center (NSC) and the Herb Brooks Foundation announced a partnership to continue the well-established Schwan’s Cup high school hockey tournament under a new identity -- the Herb Brooks Holiday Classic. The tournament will continue under the ownership of the NSC.

The holiday week tournament, which this year featured 120 varsity and junior varsity teams – both boys’ and girls’ – has been sponsored by the Schwan’s Company for 17 of its 18 years.

“Schwan’s is a proud supporter of youth athletics across the state of Minnesota and has deeply appreciated the opportunity to work with the National Sports Center on the Schwan’s Cup for nearly 20 years,” said Mike Smith, vice president, corporate communications, public relations, sponsorships & events for Schwan’s Company. “We are excited to pass the puck to the Herb Brooks Foundation as they take the lead on the annual holiday tradition of staging a great hockey experience for high schoolers and fans. We wish the event nothing but success in the years to come and look forward to continuing our support of thousands of youth hockey players at the Schwan’s supported Red Baron Arena & Expo in Marshall, Minnesota.”

Here is a look back at the tournament’s proud history:

The tournament started in 2001 as the Capital City Classic, with just eight varsity teams playing at the Xcel Energy Center. Schwan’s joined as the tournament’s title sponsor the next year, 2002, and has been the title sponsor through the 2018 edition. 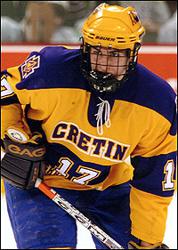 Ryan McDonagh played in Schwan's Cup in 2008, and then went on to represent the USA at the 2014 Sochi Olympics.

Dozens of Schwan’s Cup players have gone on to hockey greatness:

The tournament has generated $23.4 million in total economic impact from visitors to the communities hosting tournament games.