Collaboration and teamwork front and center at rink dedication

On the very day the USA Olympic Hockey Team pulled off its improbable upset of the powerhouse Soviet Union at the 1980 Olympic Games, the hometown of coach Herb Brooks celebrated a different kind of monument to teamwork.

Thanks to a donation from the Minnesota Wild, U.S. Bank, and the EZ Ice rink company from Boston, the Herb Brooks Foundation (HBF) received a donation of a new outdoor ice rink. The 100x60 foot natural ice rink is located outdoors at the Conway Recreation Center in Saint Paul, near to where coach Herb Brooks grew up on the east side of Saint Paul. 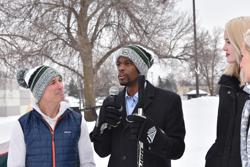 “If you grew up anywhere near hockey in America, the phrase ‘Do you believe in miracles?’ ” is an iconic phrase,” said Saint Paul Mayor Melvin Carter.

Kids representing the Sanneh Foundation, which operates the Conway Recreation Center, the HBF Rink Rats program, and the DinoMights youth hockey program skated on the ice with Nordy, the Wild mascot, and the mascot of U.S. Bank.

“Being out in the community and supporting the State of Hockey is really important to us as an organization,” said Majka. “Our mission is to create a greater State of Hockey, and this is exactly what we’re talking about here.”

Cherney emphasized the collaboration needed to get the rink built, flooded, and cleared after recent snowfalls. He especially recognized Brandon Griffin, project manager at the Sanneh Foundation, as being instrumental in bringing the rink to life.

“The Wild approached us and wanted the HBF to be part of this, because they knew this is what Herbie would have wanted,” said Cherney, referencing Brooks’ belief in unstructured outdoor hockey as a key building block in player skill development. “Everyone chipped in; it was a real collaborative effort.”

Mayor Carter, who grew up skating in a Saint Paul youth hockey program called the Mariucci Inner City Hockey Program, related the lessons of Coach Brooks to the dedication of the new rink.

“If you grew up anywhere near hockey in America, the phrase ‘Do you believe in miracles?’ ” is an iconic phrase,” Carter said. “But the truth is that what happened that day wasn’t a miracle. What happened was the direct result, perhaps the inevitable result, of what happens when somebody, in this case coach Herb Brooks, realizes the power of teamwork.

“That’s what’s happening here today. In the City of St. Paul we have such incredible teammates that we can do things that are beyond the capacity of any of us can do individually. That’s what happened with that team, and that’s what we’re doing here as a city.”

And then Mayor Carter and Majka turned the kids loose on the ice with another iconic phrase in the State of Hockey, “Let’s Play Hockey!”

Enjoy the photo gallery of the rink dedication: